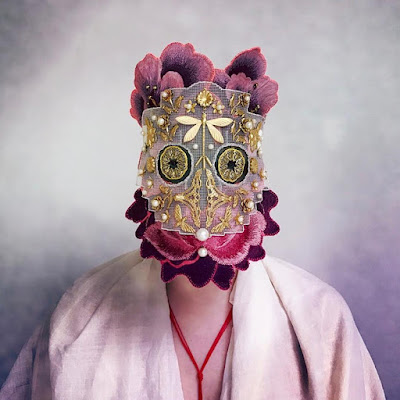 The ambiguous and the tactile join forces in the world of Magnhild Kennedy’s work: The almost-translucent, which sparkles in a particular light. The metallic and sharp-edged is mixed with soft, cool fringes; radiant, crackling plastic bags; fabric pieces that smell of the past; colorful pom-poms; tassels from outdated curtains; embroidered borders; buttons and heavy, metal chains.
In cooperation with Maja Nilsen, RAKE Visningsrom has the pleasure of presenting an exhibition by Magnhild Kennedy (b. 1978, Trondheim). Magnhild lives and works in London, and is something of a rarity: a mask-making artist. Through a number of years, under the name of Damselfrau, she has created a mask-collection that has been enthusiastically received, and which has led to collaborations with imminent musicians, designers, photographers and stage-artists, among them: Bjørk, Beyonce, Louis Vuitton, Daphne Guinness, the band Broen and Lisa Lie.
Everything comes together in Kennedy’s world: Unrivalled combinations of materials and objects, which she both creates, finds and combines in her own unique way, for example: Camilla Collett’s lace and two hundred years old geisha-hair amalgamated with mass-produced gadgets from London’s street markets. Every material has an intrinsic value and a story to tell: They are examined meticulously, twisted and turned, and the end result it created by the dialogue between the array of materials and the technical challenges that crop up during the creative process.
Kennedy’s masks attract as sculptures, as poetical jewelry and as three-dimensional ornaments, that beg to be touched and held, both in the hands and in front of the face. They are tactile discoveries, resembling collages, where many elements come together and make one unified piece, without the mystery ever been completely revealed.
Furthermore, with these masks Kennedy upholds old craft-traditions, and the masks themselves seem linked to history books, ethnological museums, shamans, rituals, processions and public gatherings, and especially, perhaps, to wedding traditions, where women where supposed to cover themselves in protection of evil spirits, in the transition from one world to the next. Damselfrau can be taken to mean both unmarried and married woman, and this inherent ambiguity fits nicely with the masks’ many-faceted nature. In front of these pieces, one is left asking questions such as: What happens the instant one puts on a mask? And: Why has the mask been so important, in so many different cultures, throughout the ages?
Kennedy first began making masks for herself and her friends to wear, when going to parties. The masks grew out of a need to create something unmistakably her own – something that was missing – and with time, and a lot of effort, she managed to create works of art that re-established the mask as an important and useful object; an object that both hides and accentuates, and which has an obvious place in the current time’s ever-increasing stream of photos and self representation.
The exhibition at RAKE Visningsrom contains an installation in which Kennedy invites the audience into her universe. For Kennedy, the mask is a site; it creates new situations, space and experiences. Places where past, present and future meet; everything can happen, everything ceases and everything exists. Welcome!

I am DAMSELFRAU
I work with masks as autonomous works of art as well as action-objects. For me the mask is a place where different elements come together as situation. The work is about this place-situation, more so than the mask as a theme or category of form. The mask is a place. I am led by the phantasms appearing in the process of the making and the materials themselves. These guide my decisions and inform the objects I make. The becoming of character as play, in between the theatrical projective and the actual of the veil, has the effect that the masks equally are subject to the projection of others as well as my own. It is in this space that the objects exist and where I find new ones.